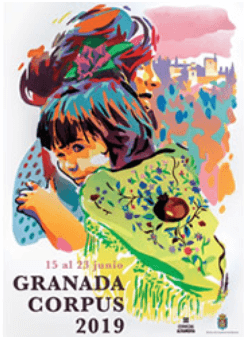 CORPUS CHRISTI GRANADA
FROM JUNE 15 TO 23 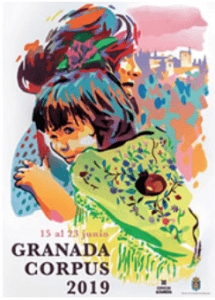 Corpus Christi is the biggest festival in Granada. It’s the Granada fair.

The fair atmosphere permeates the streets. The center is filled with lanterns and some booths are installed in Plaza del Carmen and Plaza Bib-Rambla.

Here is the midday fair.

Two important processions walk through the streets of Granada during the week of the fair: La Tarasca and La Corpus.

The first, of a pagan nature, leaves on Wednesday and the figure of a woman walks on a dragon, accompanied by giants and big heads.

The figure of the Tarasca symbolizes the triumph of good over evil, of beauty over beast.

The other is the Procession of Corpus, which gives name to the parties. It is solemn and religious, and it leaves on Thursday, which is always a holiday in the city.

In the procession of the Corpus, the Eucharist is worshiped, and for this the Custody is accompanied by the main streets and altars and awnings are placed along its route.

The first Custody was given by Queen Isabel la Catolica to the city.